We all know about the link of low levels of vitamin D associated with MS progression.  The common wisdom is that this is because vit. D modulates the immune system. But now there are more and more studies coming forward showing linkage in other neurological disorders and general brain health via the vasculature.

From Scientific American:
Low vitamin D in Parkinsons and Dementia--

And here is news of a study at SUNY Buffalo, from earlier this spring:

"Low vitamin D levels may be associated with more advanced physical disability and cognitive impairment in persons with multiple sclerosis, studies conducted by neurologists at the University at Buffalo have shown.
http://www.sciencedaily.com/releases/2010/04/100429153955.htm

Now, how could this situation be compounded when we consider CCSVI as a factor in developing MS? I believe it's all about protecting the brain from further vascular damage. Here's a wonderful research paper on how Vitamin D can provide "vasculoprotection" of the brain.

We did observe an inverse association between 25(OH) D concentration and presence of white matter hyperintensities and large vessel infarcts; indicators of cerebrovascular disease (Buell et al, in preparation). Consistent with this ﬁnding, we observed a positive association between vitamin D concentrations and the integrity and structural arrangement of white matter ﬁbers using diffuser tensor imaging. Further studies designed to provide information on the temporal relationship of 25(OH)D and brain morphology are warranted.
420 J.S. Buell, B. Dawson-Hughes / Molecular Aspects of Medicine 29 (2008) 415–422"

The underlying message is, get adequate vitamin D and sunshine. You're helping your brain, and may be slowing or preventing atrophy.

Here's a report on a new scientific study which shows how disturbed blood flow changes the vessel wall, due to inflammation and endothelial dysfunction. This study was done on arteries, but this principal would function the same way in a vein wall which is narrowed or blocked and blood flow becomes erratic due to refluxive flow.

"Scientists have previously observed that atherosclerosis occurs preferentially in branched or curved regions of arteries, because of the "disturbed flow" branches and curves create. Constant, regular flow of blood appears to promote healthy blood vessels, while low or erratic flow can lead to disease.
The standard laboratory model of atherosclerosis has scientists feeding a high-fat diet to mice with mutations in a gene (ApoE) involved in removing fat and cholesterol from the blood. Even then, atherosclerosis usually takes a few months to develop. In these models, clogs in a mouse's arteries tend to appear in certain places, such as the aortic arch, but flow patterns are set up at birth and thus are poor gauges of cause and effect, Jo says.

"We have developed a model where we disturb blood flow in the carotid artery by partial ligation, and atherosclerosis appears within two weeks," he says. "This rapid progression allows us to demonstrate cause and effect, and to examine the landmark events at the beginning of the process."
Jo says that endothelial cells, which form the inner lining of blood vessels, are equipped with sensors that detect changes in fluid flow.

"Disturbed flow is what causes the endothelial cells to become inflamed," he says"

So, how would this affect patients with CCSVI? If there is an area of the vein that is exposed to this disturbed flow, the lining of the vein will become worse, the longer the vein has this condition. Which might explain why MS continues to progress as patients age, even after there are no more inflammatory lesions in the brain, and the immune system seems to back down.  The stenosis becomes worse and worse. Blood flow becomes more disturbed, and it creates a vicious cycle.

This study might also explain why exercise and diet are so important in keeping blood flowing---
here, again, are the cardiovascular recommendations for living a heart healthy life. I honestly believe that pursuing endothelial health can help pwMS, as well.  Always check with your doctor before beginning a new health routine.

***Eat a heart healthy diet! Lots of good leafy greens, fruits and veggies. Limit saturated fats (like red meat) and stick to lean, white meat protein. Fish is a terrific choice. Stay clear of man made fats and anything the has too many ingredients (like overly processed foods.) No fructose corn syrup or transfats. Eat a good, whole food diet- like the Best Bet Diet or Dr. Swank's MS Diet.

***Move as much as you are able. Exercise- whether it is a stationary bike, seated exercise, water aerobics or yoga- is good for your circulatory system and will keep blood flowing.

***Alcohol is OK...but only small amounts. A glass of wine opens up blood vessels a bit...but any more than one drink becomes constrictive.

***Get some sun on your face. Vitamin D helps the body utilize oxygen and is a vasodilator. If you have no sun in your area, try a sun lamp and take a vitamin D supplement.

***No more smoking. Sorry. Cigarettes are vasoconstrictors- they close up blood vessels and can make stenosis worse. Study on Brain Changes in MS and Depression

There's an article and podcast in Scientific American this week regarding a new study completed at UCLA. It looks at physical brain changes in people with MS who have depression. The researchers found on MRI that the hippocampus is smaller in pwMS, and that the HPA axis (the neuroendocrine system which regulates stress and other functions) is hyperactive.  The hippocampus is the area of the brain which controls memory and mood---and a hyperactive HPA axis is related to increased cortisol release and stress.  Both of these brain changes are real, measurable, and related.

If you have chronic hypoxic insult (meaning an ongoing lack of adequate oxygen) to your brain, you'll have a smaller hippocampus and a hyperactive HPA axis.   And you'll most likely suffer from depression.
Here's the link and podcast

Those with hypoxic injury show atrophy of the hippocampus and hyperactive HPA axis. JUST LIKE people with MS, and people who have suffered a brain injury due to drug use, carbon monoxide poisoning, and sleep apnea.  There is a decrease in brain tissue due to neuronal loss.  And this is linked to lowered oxygen levels.
Here are some studies to back this up:

Hypoxia damages multiple organ systems especially those with high oxygen utilization such as the central nervous system. The purpose of this study was to compare the neuropathological and neuropsychological effects of hypoxia in patients with either carbon monoxide poisoning or obstructive sleep apnea. Neuroimaging revealed evidence of hippocampal atrophy in both groups.

I talked about this at length with Dr. Haacke last year. I know that he and Dr. Hubbard are looking at oxygenation levels in pwMS before and after angioplasty using fMRI BOLD technology, and they are finding that patients indeed have lower oxygen levels in their brains before, and better oxygenation after.

The pieces fit together when we look at MS as a disease of chronic venous insufficiency.  Slowed blood flow to and from the brain is related to reduced oxygenation of tissue.
If ordinary people like you and I can see this...isn't it time for the medical profession to see it, too?

There are things that can be done to help alleviate depression.
Exercise, UV ray therapy, whole foods full of phytonutrients can all be helpful.
So can therapy and drug treatment.
Don't suffer in silence.  If depression is part of your MS---you are not alone.
Please get help, 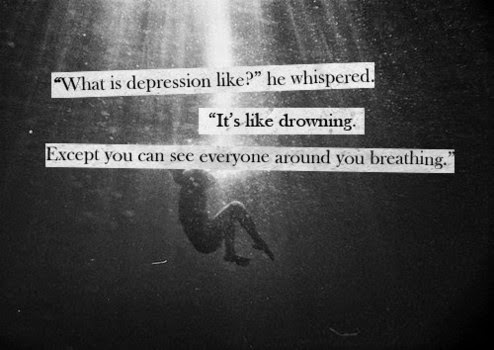