To sleep, perchance to oxygenate

One of the most profound, although seemingly minor, changes for my husband, now 18 months since his venoplasty for jugular and dural sinus stenosis--has been the return of dreaming.  After his procedure, he would wake up in the morning and recount for me his vivid dream from the night before.  It was so strange to us...he realized that for several years, he couldn't remember his dreams.

He was now sleeping soundly, no longer spasming or waking up gasping for air.  And in this deep sleep, his dreams had returned.

When I went to the CCSVI international symposium in Bologna last year, Dr. Salvi got up and spoke about the changes in his patients after angioplasty.  And one of the global differences his patients noted was deeper, more restful sleep, and the return of dreams.  He had a wonderful illustration that came on the screen during his power-point-- a cartoon of a person deeply sleeping, smiling, with a colorful dream bubble over their head.  I almost leapt out of my seat.  "That's happened to Jeff!"  I whisper/exclaimed to Dr. Dake, seated on my left.  "He's dreaming again."
Now, I read time and time again from patients and their caregivers about the return of deep, restful sleep and dreaming.  I realize that dreaming might not seem important in the grand scheme of recovery from MS....but I believe it is.  I believe it is proof of a brain that is healing.  A brain that does not have REM (rapid eye movement) sleep, does not dream.   There is research that links dreams, REM sleep and oxygenation.

"REM sleep time is strongly reduced by hypoxic and increased by hyperoxic atmosphere, in accordance with the existence of an O2 diffusion limitation. Any pathological decrease in arterial PO2 and/or O2 delivery creates a specific risk in REM sleep."
http://www.ncbi.nlm.nih.gov/pubmed/11382905

During REM sleep, there is an increase in blood flow to the limbic system and the brain stem, with circulation to these structures decreasing during non-REM sleep.  As brain activity increases during REM sleep, the cerebral requirements for glucose and oxygen both increase....
Fundamentals of Sleep Technology--Butkov, Lee-Choing  2007

One would normally consider David Maurice, Ph.D., professor of ocular physiology in the Department of Ophthalmology at Columbia-Presbyterian Medical Center, a revolutionary. Nevertheless, he has reignited a decades-long controversy that could spark a revolutionary re-evaluation of an entire field of behavioral research. Dr. Maurice has developed a startling new line of scientific inquiry that, when added to other findings, could change our understanding of rapid eye movement (REM) sleep and the nature of dreams.

What Maurice has done is to suggest an alternative explanation for the phenomenon known as REM sleep, the stage in which the eyes rapidly move and most dreams occur. Dr. Maurice isn't convinced by currently accepted theories about why REM occurs, including the widespread belief that REM exists mainly to process memories of the preceding day's events during dreams. Instead, he hypothesizes that while they sleep humans experience REM to supply much-needed oxygen to the cornea of the eye. In a recent issue of Experimental Eye Research, Maurice suggests that the aqueous humor--the clear watery liquid in the anterior chamber just behind the cornea--needs to be "stirred" to bring oxygen to the cornea.1

This research into REM and oxygenation is still in the beginning phases.  Perhaps the low level oxygen deprivation in the brain caused by CCSVI causes what we now understand as MS spasms, myclonus, and apnea.   In a drastic attempt by the brain to rouse the body, to sit up, to take in more oxygen.  My husband used to wake violently in the night, gasping for air.  His spasms would jerk him awake.  Before angioplasty, he never slept thru the night.  He never dreamed.  No wonder he was exhausted all day!

Now, I'm the one who wakes in the night-- to see him next to me, peaceful, breathing normally, and dreaming.  What has changed?  He used to have two malformed jugular veins which deferred to skinny, insufficient collaterals.  As soon as he lay down to sleep, those jugulars created slowed perfusion.  After venoplasty, he has restored venous flow.  And that is enough to allow his brain the oxygen it needs. That is enough for REM, for normalized perfusion, for dreaming, for healing. 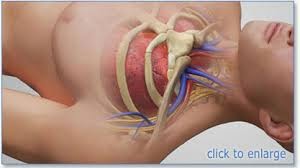