A medical student from Case Western University has been providing some interesting research in the US for CCSVI.

Claudiu Diaconu first presented his research proposal to study CCSVI in November 2010 at the Lepow Day at Case Western.  This is a yearly event, where medical students present their research projects.  Diaconu's was called:  An Assessment of Chronic Cerebrospinal Venous Insufficiency -Tissue Analysis of the Cerebrospinal Veins.  His study was funded with a grant from the NMSS.

In his proposal, Diaconu set out how he would harvest the autopsied veins and inject them with a silicone gel in the lab, so that the interior of the vein could be studied.  This was one part of his study, which also included doppler ultrasound and MRV assessment of CCSVI.

At ECTRIMS, Claudiu Diaconu's research created a bit of a stir.  A year after his proposal he came forward with evidence of the truncular venous malformations associated with CCSVI.  The intraluminal defects that Dr. Zamboni has been describing for years.
The same Cleveland Clinic group also has begun examining cerebrospinal veins from cadavers of MS patients and controls.
Some results from the first 13 cadavers were presented during a platform session at ECTRIMS by Case Western University medical student Claudiu Diaconu. He confirmed that venous structures in the brain and brainstem appear to be far more complicated and variable than previously thought.
In fact, the postmortem study revealed the presence of a novel venous valve that had not been described in anatomy textbooks.
Perhaps the most important finding was that most of the stenoses identified in the study were not associated with vessel wall thickness or circumference.

And the results of his study, so far, are found in this abstract-
link
Anatomical and histological analysis of venous structures associated with chronic cerebrospinal venous insufficiency

Conclusion: Post mortem examination of the IJV and AZY veins of MS patients and non-MS controls demonstrated a variety of structural abnormalities and anatomic variations. Vein wall stenosis occurred at similar frequency in MS and non-MS controls. However, the frequency of intraluminal abnormalities with possible hemodynamic consequences was higher in MS patients compared to healthy controls, although the current sample size is limited.

It is this type of inquisitive and open collaboration of medical practices which will elucidate the connection of CCSVI and MS, and help us move forward, as doctors understand the best means to deal with these intraluminal defects.

These are mechanical defects, which means there is no money for pharmaceutical companies, and less money for research.  But there are answers to be found, and help and healing for those with MS. 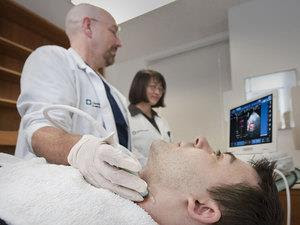