Fibrinogen---found In ALL neurodegenerative diseases, not just MS

The "news" this week was that fibrinogen, an essential clotting protein, crosses over the blood brain barrier in the mouse model of MS and initiates the disease process by destroying nerve cells.

Fibrinogen-induced perivascular microglial clustering is required for the development of axonal damage in neuroinflammation
http://www.nature.com/ncomms/journal/v3/n11/full/ncomms2230.html

But this isn't news.  Researchers have been studying this process in neurodegenerative disease for a decade.  Because this process happens when the blood brain barrier breaks down.

The overall findings from study of Alzheimer's Disease brain tissue and in vivo in Abeta(1-42) and Abeta(1-42) plus fibrinogen stimulated rat hippocampus suggest microglial responses to promote increased extravasation of blood protein as a critical component in amplifying inflammatory reactivity and causing neuronal damage in inflamed AD brain.
http://www.ncbi.nlm.nih.gov/pubmed/18657226

Fibrinogen is a pleiotropic blood protein that regulates coagulation, inflammation and tissue repair. Fibrinogen extravasates in the nervous system after injury or disease associated with vascular damage or blood-brain barrier (BBB) disruption. Fibrinogen is not merely a marker of BBB disruption, but plays a causative role in neurologic disease as a potent inducer of inflammation and an inhibitor of neurite outgrowth. Fibrinogen mediates functions in the nervous system as a ligand for cell-specific receptors. In microglia, fibrinogen mediates activation of Akt and Rho via the CD11b/CD18 integrin receptor, while in neurons fibrinogen induces phosphorylation of epidermal growth factor (EGF) receptor via the alphavbeta3 integrin. Pharmacologic targeting of the interactions of fibrinogen with its nervous system receptors could provide novel strategies for therapeutic intervention in neuroinflammatory and neurodegenerative diseases.
http://www.ncbi.nlm.nih.gov/pubmed/19630789

Why the race for researchers to understand fibrinogen?
Because pharma wants to monetize a way to block it.
That's right....researchers are not studying WHY fibrinogen is breaking through the blood brain barrier.  No one is looking at causation.
Everyone is studying this to find a pharmacological means of stopping fibrinogen.

But, what if there is an underlying mechanism which begins fibrinogen activation in all neurodegenerative disease?
Wouldn't that be something to study?  Wouldn't that be causation, and lead to potential answers in disease aetiology?

Here's a paper I researched and wrote up for CCSVI Alliance on the discovery of CCSVI in other neurological disease.  It proposes the mechanism found in common with CCSVI in neurodegenerative disease.  Slowed cerebral bloodflow.

One of the most surprising findings of the present study is that the decline of cerebral blood flow (CBF) in conjunction with hypoxia is sufficient to induce rapid microvascular thrombosis and fibrin deposition within the brain (Figure 9). By analyzing challenged fibrinogen-null mice we have established that fibrin(ogen) plays an important role the reperfusion deficits and brain infarction (Figure 10). These results suggest that if cerebral ischemia is accompanied with hypoxia, this combination can precipitate local coagulation and impede reperfusion after ischemia, similar to the previously described no-reflow phenomenon after cerebral ischemia5 and cardiac arrest.56 It seems likely that fibrin stabilization of platelet thrombi is a major determinant of brain tissue damage. If so, we would predict that a similar, if not more impressive, protection from tissue damage could be realized in mice with a profound defect in platelet function. It is also conceivable that fibrin-mediated inflammatory processes drive secondary tissue damage in the brain. Thus, the modified Levine/Vannucci model described here may be useful for testing new therapies to restore postischemic reperfusion in the face of thrombolytic agents and other approaches to reopened large vessels.
Regarding the mechanism of ischemia/hypoxia-induced thrombosis, it seems likely that hypoxia alters the balance between anti- and procoagulation properties of the endothelial cells in cerebral blood vessels. Although focal ischemia can trigger platelet accumulation and fibrin deposition, these events typically show a late-onset after a transient hyperemia phase.49,53 In contrast, the present study shows that the combination of ischemia and hypoxia precipitates these events almost immediately.
http://www.ncbi.nlm.nih.gov/pmc/articles/PMC1780162/

Please encourage and support the researchers of the International Society for Neurovascular Disease.
http://www.isnvd.org

There are only a few groups looking at disease aetiology, or what is causing the disease process.

Blocking fibrinogen won't cure MS.
Understanding why there is fibrinogen in brain tissue may.
Joan 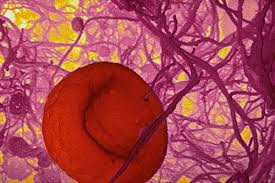