In the last two years, the paradigm for treating MS has changed.  Vitamin D supplementation is routinely recommended.  A healthy diet and exercise are encouraged.  Stress reduction and lifestyle changes, like smoking cessation, are encouraged.

We are seeing a subtle shift in the understanding of MS as a purely autoimmune disease which cannot be modified, to an inflammatory disease which can be addressed with lifestyle changes encouraging cardiovascular health.

We also now understand that the changes which happen to the brain early in the MS disease process create pain, depression and fatigue.  These are not imagined symptoms.  They are real, and linked to atrophy of the hippocampus and thalamus.

Here is some more background about how MS has been viewed and treated throughout history.
You will see, the shift in how neurology considers MS is still evolving.
We're getting there.

The history of MS research is full of assumptions that were once held as fact by neurologists, but were later proven untrue.  It's important to review how multiple sclerosis patients have been described over the course of history, in order to understand the current mindset of neurology.  I hope this opens some eyes.

Each of these three points were once believed to be factual.  We now know they were wrong, dead wrong.
But the repercussions of these inaccurate beliefs linger today.

1. MS is related to the patient's psychological condition.

The very beginnings of MS research were dominated by French neurologist Charcot's fascination with hysteria and personality disorders as related to neurological disease.

Hysteria, from the ancient Greek word for uterus, was a nervous illness long associated exclusively with women. Symptoms differed from patient to patient and from one historical period to another, but they always involved both the body and the mind. Some characteristic symptoms included shortness of breath, heaviness in the abdomen, muscular spasms and fainting. Anxiety, irritability and embarrassing or unusual behaviour were also noted.

Hysteria received intense attention during the late 1800s. The French neurologist Jean-Martin Charcot proposed hysteria was an inherited nerve disease, similar to multiple sclerosis...Charcot investigated hysteria using hypnosis. In lectures he invoked characteristic symptoms in male and female hysterics by applying pressure to specific spots on the hypnotised patient’s body. Critics argued these performances testified to Charcot’s powerful influence over his patients, not the nature of hysteria.
http://www.sciencemuseum.org.uk/broughttolife/techniques/hysteria.aspx

This subtle message, which began as an understanding of MS as a disease involving the psyche,  was that MS was somehow initiated by a personality or nervous disorder which could be controlled by the neurologist.  This subtext continued on into the 20th century.  Here is research from the 1950s.

"The personality characteristics associated with multiple sclerosis as revealed by the MMPI profiles are presented and discussed. The personality characteristics revealed are: a reaction of depression, preoccupation and concern about bodily functions, feelings of hopelessness and insecurity, as well as tendencies toward indecisiveness, narrowness of interests, and introversion. Difficulty in accepting the disease, and its progressive limitations, as well as ambivalence and insecurity concerning the future, are often reflected in relatively poor emotional control and social adjustment."
http://psycnet.apa.org/journals/ccp/15/3/253/

2. MS does not cause fatigue.

Patients were told to stop exercising and to rest in order to avoid relapses.  The underlying message, again, was that there was a personality type that developed MS--neurotic, stressful, type A personality--hysterics. The message was that if patients could just rest, take it easy, not worry;  they could avoid relapses and disease progression.  This has been proven untrue.  Many different people develop MS: from athletes to academics, from mothers to rock stars, from children to middle aged adults.   And stress and rest are not part of the equation in contracting the disease.  And fatigue is often the presenting symptom before an official MS diagnosis as we learned this week.  And those who are able to exercise do better with symptom management.

3. MS does not cause pain

When most people think of multiple sclerosis, they think of a disease that causes symptoms of weakness and motor problems -- not pain.
"About 10 or 20 years ago, there was a saying that MS causes all kinds of trouble but doesn't cause pain, which really isn't true," says Francois Bethoux, MD, director of rehabilitation services at the Mellen Center for Multiple Sclerosis Treatment and Research at The Cleveland Clinic.
http://www.medicinenet.com/script/main/art.asp?articlekey=52405

I believe that the distance between the multiple sclerosis patient and the neurologist was allowed to persist through the historical characterization of the MS patient as hysteric, emotionally labile, neurotic or mentally unbalanced.  These false depictions were created by a group of doctors who were threatened by their own personal lack of understanding of the disease and inability to change its course.    It was too difficult to confront the ravages of MS and not be able to cure the disease.  It was easier to portray the patient as defective and the source of their malady.   This provided a comfortable distance between doctor and patient.

Neurology so distanced itself from the patient, that THEY DIDN'T EVEN BELIEVE THE MS PATIENT WAS IN ACTUAL PAIN.  It took over one hundred years for neurologists to admit that there might be pain, or fatigue, or depression caused by multiple sclerosis.  This is absurd.

Since the advent of MRI technology, doctors have concrete evidence of the degredation of gray matter, atrophy of the hippocampus, and demyelination in areas of the brain responsible for emotion, pain and cognition.  All of these changes to the brain are linked to depression, pain and fatigue.
http://ccsviinms.blogspot.com/2010/07/study-on-brain-changes-in-ms-and.html

These changes to the brain occur early in MS.  Researchers can see the slowed blood flow and hypoperfusion.  They can study fMRI images. 7Tesla imaging (Ge, et al) has allowed researchers to see the microscopic vascular changes that happen to the veins in the MS brain.
http://ccsviinms.blogspot.com/2009/12/hypoperfusion-decreased-blood-flow-in.html

The physical changes to the brain are caused by a disease process.  They are not psychological or imagined.   The disease comes first, and the brain damage follows.

If there are any young neurologists reading this, I implore you, bridge the gap between patient and doctor.
Look at your patients as family members, friends, siblings, loved ones, human beings.
Study their MRI images, work with vascular doctors and look at their cerebral blood flow, specifically, the venous return.  Don't be afraid of collaboration between disciplines.  For this is the future of medicine.

Talk to your patients, but most importantly, listen to them.  When they tell you they are in pain, or exhausted or depressed--believe them.  Try to help them.  And try to learn WHY this is happening.

It's time to say goodbye to the era of Charcot and hysteria.  It's time for science.
Joan 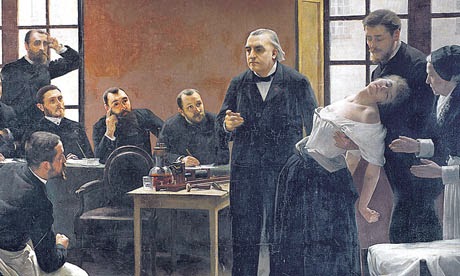