A new study from Harvard School of Public Health followed pwMS for 5 years and found that those with increases of 50-nmol/L in average blood vitamin D levels within the first 12 months after diagnosis showed
57% lower risk of new active brain lesions,
57% lower risk of relapse,
25% lower yearly increase in T2 lesion volume and 0.41 percent lower yearly loss in brain volume from months 12 to 60.

There were 465 patients enrolled in this study, which was originally designed to measure efficacy of beta interferon.   Fortunately, all had at least one measurement of their serum vitamin D status during the time they were followed with neurological exams and MRIs, up to 5 years in total.  The researchers were not supplementing vitamin D, they were simply measuring it, as part of the blood samples they were collecting.

This study is unique, in that it started out as simply a study of beta interferon--and ended up showing that vitamin D status was a very important factor in disease activity.  The researchers measured vitamin D status in pwMS who were a part of this study during their first year, and then followed these patients with MRI and neurological evaluations to see how their MS progressed.

But does this mean that vitamin D supplementation is the only solution?  I would like to encourage more researchers to look at the work of Dr. Richard Weller, a scientist from the University of Edinburgh.  Dr. Weller is examining how vitamin D status serves as a marker of exposure to UV rays.  His research has shown that vitamin D status is closely related to latitude and exposure to sunshine.  Perhaps we need to consider this factor for pwMS.  UV rays release stores of nitric oxide from our tissues, improving endothelial health and the cardiovascular system.

Here is a wonderful TED talk from Dr. Weller on his research.
http://www.ted.com/talks/richard_weller_could_the_sun_be_good_for_your_heart.html


And also today, the results of a new study from Dr. Weller's team and Dr. Feelisch from the University of Southampton.


During the study, the skin of 24 healthy individuals was exposed to ultraviolet (UVA) light from tanning lamps for two sessions of 20 minutes each. In one session, the volunteers were exposed to both the UVA rays and the heat of the lamps. In another, the UV rays were blocked so that only the heat of the lamps affected the skin.

The results suggest that UVA exposure dilates blood vessels, significantly lowers blood pressure, and alters NO metabolite levels in the circulation. Further experiments indicate that pre-formed stores of NO in the upper skin layers are involved in mediating these effects. The data are consistent with the seasonal variation of blood pressure and cardiovascular risk at temperate latitudes.

Professor Feelisch adds: "These results are significant to the ongoing debate about potential health benefits of sunlight and the role of Vitamin D in this process. It may be an opportune time to reassess the risks and benefits of sunlight for human health and to take a fresh look at current public health advice. Avoiding excess sunlight exposure is critical to prevent skin cancer, but not being exposed to it at all, out of fear or as a result of a certain lifestyle, could increase the risk of cardiovascular disease. Perhaps with the exception of bone health, the effects of oral vitamin D supplementation have been disappointing.

"We believe that NO from the skin is an important, so far overlooked contributor to cardiovascular health. In future studies we intend to test whether the effects hold true in a more chronic setting and identify new nutritional strategies targeted at maximizing the skin's ability to store NO and deliver it to the circulation more efficiently."
http://www.sciencedaily.com/releases/2014/01/140117090139.htm

Here is a recent paper from BNAC which looked at vitamin D, sunlight exposure, and brain volume on MRI in people with MS.

Sun exposure may have direct effects on MRI measures of neurodegeneration in MS, independently of vitamin D.


I would suggest that worldwide deficiencies in Vitamin D may well be a biomarker of our modern lifestyle.  We spend less time outdoors, and the time we are in the sun, we are covered up with clothing or sunscreen, limiting the amount of UV rays that can penetrate our skin.  This would also further explain the correlation of latitude and MS rates around the globe.

I've written to and connected Dr. Weller to the researchers at the ISNVD, and encouraged him to reach out to his colleague, Dr. Jim Wilson, who is currently looking at chronic illness in Scotland.  He replied that he is very interested in looking at UV rays in MS, and is currently writing grant applications to study this.

Something to ponder,
Joan 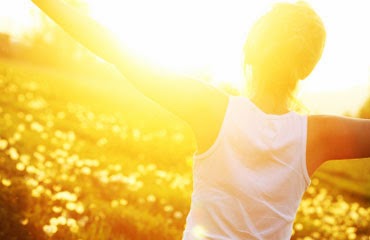