Once again, the medical news headlines are full of "breakthrough!" "cause of MS!" "new way of looking at the disease!" and even "Cure!"
link
link

Researchers in the UK and Canada have found the protein Rab32 appears in large quantities in autopsied brain tissue of those who had MS.  Higher levels of this protein cause a disruption of communication between cells, and lead to mitochondrial malfunction and neurodegeneration.  Researchers say they do not know what causes this increase in Rab32, but they believe that by inhibiting this protein with new treatments,  they can slow MS progression.  However, neurovascular researchers have been studying this mechanism for many years in Alzheimer's, ALS, Parkinson's and dementia---and vascular researchers know why this happens (keep reading.)
link
link
link

I find it's always a good idea to read the actual research, rather than rely on click bait or fake news headlines.  Many medical reporters have only a basic understanding of science.  The researchers who send out press releases like to keep it that way. The news stories continue to mention the autoimmune theory of MS right at the start, yet this new discovery has little to do with autoimmune disease, and almost everything to do with inflammation of the vasculature and endothelial dysfunction.

Here is the complete paper:
https://www.ncbi.nlm.nih.gov/pmc/articles/PMC5260063/

Together, using multiple patient tissue samples, our findings indicate that Rab32 increases dramatically in neurons and macrophages/microglia localized within active MS lesions and that high amounts of Rab32 coincide with the expression of CHOP. In contrast, chronic MS lesions show Rab32 predominantly in neurons.

Simmen and his colleagues were quick to note that it’s not yet clear what actually causes the surge of Rab32. They also note that Rab32 is likely not the only important protein when it comes to unraveling the mystery of MS.
“Rab32 is just one of the proteins that is having the effect of drawing the ER and mitochondria too close. There are dozens of other possibilities,” he said.
link


So,  as we learn when digging a bit deeper into the research, it's not just about the increase of Rab32.  This just makes a great headline, and will fund ongoing research for these labs.  But there are other unfolded proteins causing cellular disruption.

At the center of this "discovery" is the endoplasmic reticulum (ER) and ER stress.  The ER is a membraneous structure of a cell, it connects to the nucleus and provides a protective and cleansing function.  Red blood cells do not have ERs...but the liver or pancreas cells have lots of them.  So does the brain.  This is because the ER allows for protein synthesis. And we've known about ER stress in other disease for quite a while.  So, to catagorize this as a "discovery" is not really true.  It's just new for MS researchers to look at how ER stress is linked in Rab32 increases in the MS brain.

The link of ER stress and neurodegeneration is not new.
The ER stress-associated cell death pathways have been recognized in the numerous pathophysiological conditions, such as diabetes, hypoxia, ischemia/reperfusion injury, and neurodegenerative disorders, including Alzheimer's disease, Parkinson's disease, and bipolar disorder.
link

Under various pathological conditions, the perturbation of any of the three physiological functions of the ER results in so-called ER stress and can lead to an accumulation of the newly synthesized unfolded and misfolded proteins in the ER. Among the stimuli that promote ER stress are ischemia, inflammation, and disorders that impair the ER’s ability to properly fold polypeptides or eliminate unfolded proteins (11).
link

Thanks to the work of vascular researchers, we know a few things which can create ER stress.  I suggest reading this complete paper.  link
But to summarize:

All the stuff mentioned in the Endothelial Health Program.
link
There are things you can do today to improve health and reduce ER stress.

A final thought for blog readers---targeting one misfolded or rogue protein without considering the mechanism which leads to this perturbation may not be the most successful approach. This is my main concern, and why I wrote this post. We have learned this through years of Alzheimer's research and treatment targeting the beta amyloid protein, which still has no success in alleviating the disease process. In contrast, a multimodal lifestyle approach employed at UCLA led to Alzheimer's disease reversal. link

Continue to dig deeper, past the MS News headlines.
There is truth beneath all of the hyperbole. 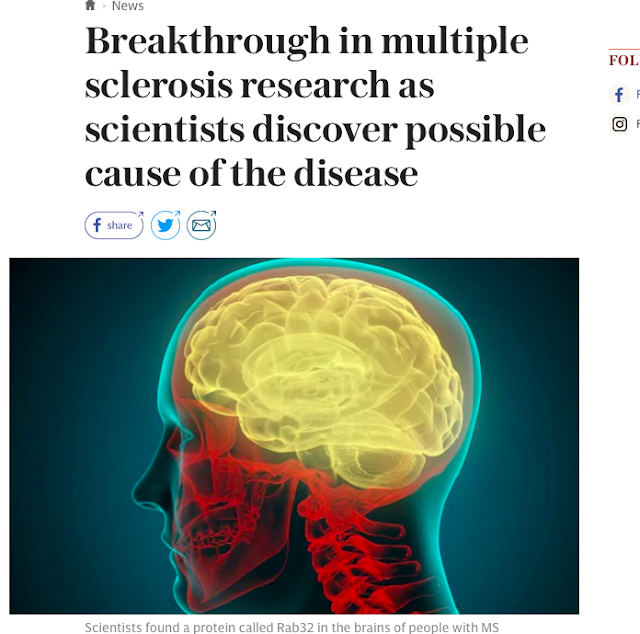