A year after Jeff was diagnosed with Multiple Sclerosis, I wrote several university researchers regarding MS as a vascular disease of endothelial dysfunction.  One of these researchers was at my alma mater, the University of Rochester.  I had first read about his work in our alumni newsletters, and later on pub med. link

Berislav Zlokovic was initially inspired to understand the blood brain barrier's role in neurodegeneration after losing a dear friend to ALS.


"The vascular system is crucial to health -- it's how oxygen and other nutrients are delivered to cells, and how toxins are removed," said Zlokovic, who is professor of Neurosurgery and Neurology and director of the Center for Neurodegenerative and Vascular Brain Disorders. "Any damage to the vascular system is a serious threat to the organism. It's clear now that the vascular system is certainly involved in the development of ALS."
Zlokovic first began doing research on the disease in 2004, when a former classmate from medical school who had been diagnosed with ALS and was looking for new treatments contacted him. By the time his friend died two years later, Zlokovic was well underway in studies investigating the possible role of the vascular system. link

He has been one of the premiere researchers looking at how the vasculature is implicated in the breakdown of tight junctions in all diseases of neurodegeneration.  I wrote to him about Dr. Swank's prior research on capillary fragility, and how I thought it made sense when observing the petechial bleeding on my husband's legs, his enhancing MS lesions on MRI, and the possibilty that the cause of both was systemic endothelial dysfunction.
(Swank RL. Subcutaneous hemorrhages in multiple sclerosis. Neurology. 1958; 8: 497-498.)

Dr. Zlokovic did not reply to my intial inquiry, but we did eventually connect after his presentation at the ISNVD as the keynote speaker, 2011 in Bologna.  He soon left the U of R for the University of Southern California's Keck School of Medicine.

I was thrilled to see that his lab has recently received $25 million in grants to study how leaky blood vessels in the brain contribute to Alzheimer's Disease.  link

Berislav Zlokovic, MD, PhD, a pioneer of the theory that fixing the brain’s leaky blood vessels will prevent Alzheimer’s disease, has received four grants totaling up to $24.9 million over five years.

The funding allows Zlokovic, director of the Zilkha Neurogenetic Institute, to attack from different fronts the blood-brain barrier, a gatekeeper that prevents toxic substances from entering the brain.
“The brain contains 400 miles of blood vessels that can stretch from Los Angeles to San Francisco,” said Zlokovic, chair and professor of physiology and biophysics at the Keck School of Medicine of USC. “If there is a leak along this vascular tube and the pothole is, for example, near the hippocampus — the center of learning and memory — that can contribute to the development of dementia and Alzheimer’s disease. We can delay the onset or slow the progression of Alzheimer’s if we are able to fix leaky capillaries when they first start, some 10 to 15 years before Alzheimer’s symptoms even surface.”

But at the same time, I'm deeply saddened by the realization that we are still in this same place----sixty years after Dr. Swank first noted leaky capillaries and petechial rashes in people with MS and successfully treated this issue in many patients with diet and exercise. link   Thirty years after Dr. Franz Schelling discovered the venous connection to MS and inspired Dr. Paolo Zamboni to look at jugular reflux in people with MS.  link  It sometimes feels like an endless cycle of discovery and amnesia, as researchers uncover, and then willfully bury or forget the vascular connection to diseases of neurodegeneration.

“The blood-brain barrier’s leaks allow many blood-derived toxic products, cells and pathogens to enter the brain and directly damage brain circuits involved in memory and learning,” Zlokovic said. “Additionally, bad proteins that normally are ejected from the brain, such as beta-amyloid, have to struggle against the flow of traffic. This situation can eventually lead to ‘a second hit’: Beta-amyloids and tau tangles remain in the brain and cause damage that become evident years later.”

The research will determine the structure of the perivascular space, how cerebral brain fluid reacts to changes in brain equilibrium and blood-brain barrier leakage. The ultimate goal is to identify therapeutic targets for the treatment of small vessel disease of the brain, which may contribute to cognitive impairment.
I honestly hope Dr. Zlokovic and his team find new therapeutic targets.  They sure have a bunch of money to do so.  However, researchers might do well to also look at mechanistic issues behind these leaky blood vessels.  Venous hypertension and CCSVI were contributing to the breakdown of my husband's blood brain barrier.   Venoplasty to repair his jugular veins resulted in disease reversal for him--with no new lesions and a reversal of gray matter atrophy.   The spots on his legs, and the spots in his brain were connected.  Diet and exercise have continued this virtuous cycle of healthy cerebral perfusion, shear stress, and endothelial cell health.

Don't wait for this ongoing research loop to end with some new blockbuster drug.  There are things you can do today, to help heal your endothelial cells and limit the breakdown of capillaries.
Promise.   link 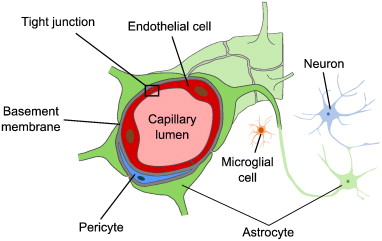