China continues to lead the research

New research from neurosurgeons in Beijing looks at how the veins impact brain health.
https://www.ncbi.nlm.nih.gov/pmc/articles/PMC6932895/

As most of you know by now, the arterial side, or blood flow delivery, receives all of the research.  We have scans for the carotid arteries which are routinely given for stroke and cognitive dysfunction in aging populations.  But this new resarch looked specifically at how jugular venous stenosis impacted cerebral perfusion, or the amount of blood flow exiting the brain.

It has seemed obvious to most of us that consideration of venous health must be determined in diseases of neurodegeneration.  Sadly, this is not so in western neurology.  North American and European neurology remains content to ignore venous health.

Cerebral venous stenosis (CVS) mainly results from extracranial venostenosis (internal jugular vein stenosis, IJVS) and intracranial venostenosis (cerebral venous sinus stenosis, CVSS) [4–7]. Previous publications have described its typical clinical manifestations such as headache, noise, visual impair, sleep disorder and dysphrenia [4, 8]. It can be confirmed by magnetic resonance venography (MRV), computed tomography venography (CTV) and digital subtraction venography (DSV) generally, however, the presentations of brain tissue and perfusion-metabolism status are not fully known. Furthermore, since covered by CAS, some venous stenosis may be misdiagnosed. As for these patients, only treating on arterial stenosis is far from adequate, in contrast, restoring the patency of venous outflow is the key to relieve the refractory neurological symptoms. The aim of this study is to describe the clinical characteristics and imaging findings in CAS, CVS and CAVS, in attempt to further aid the differentiation of these disorders in the clinical settings.

Cerebral arterial stenosis (CAS) plays an important role in chronic cerebral circulation insufficiency (CCCI) [1–3]. Persistent reduced cerebral blood volume and flow cause ischemia and hypoxia in the brain tissue, leading to various brain dysfunctions [1]. Chronic cerebrospinal venous insufficiency (CCSVI) has also been confirmed to contribute to neurological deficits and impose a significant impact on cerebral arterial circulation to some extent [4–9]. In theory, CCSVI plays a causative role in pathogenesis of CCCI as well. Venous outflow disturbance may raise the pressure in arterio-venous anastomoses and affect the blood flow (CBF) and volume (CBV) in the arterial system subsequently [4–6]. Advanced neuroimaging can confirm vasculopathic diagnoses, but clinicians often neglect to further explore the disorders as they related to venous vasculopathy. This leaves many patients with rather severe venous stenosis-related ailment untreated and in a great deal of suffering.

And what did they find?

It is now eleven years since Jeff was treated for his severe jugular venous stenosis.  His previous symptoms of headache, fatigue, heat intolerence, dizziness, sleep disturbance, and sleep apnea have remained resolved.  He is able to jog, work, engage in outdoor activities, travel, live life.  He has had no further white matter lesions, and his gray matter atrophy has reversed.  His brain continues to heal, as many lesions have shrunk or disappeared.  For this, we are thankful.

I am also thankful that the ISNVD continues to study venous stenosis and MS diagnoses.  I am thankful for the Chinese researchers who are helping their patients, and looking at how treating venous stenosis heals the brain.
Here are a few of their publications on treating jugular venous stenosis, and outcomes.
https://journals.sagepub.com/doi/10.1177/0300060519860678
http://www.ijcem.com/files/ijcem0042381.pdf
https://onlinelibrary.wiley.com/doi/full/10.1111/cns.12859

I am not hopeful for North American and European research, however, as the MS drug companies are forecast to be a $40 billion dollar industry by 2026.   link

Here are some of the images from the Chinese publication 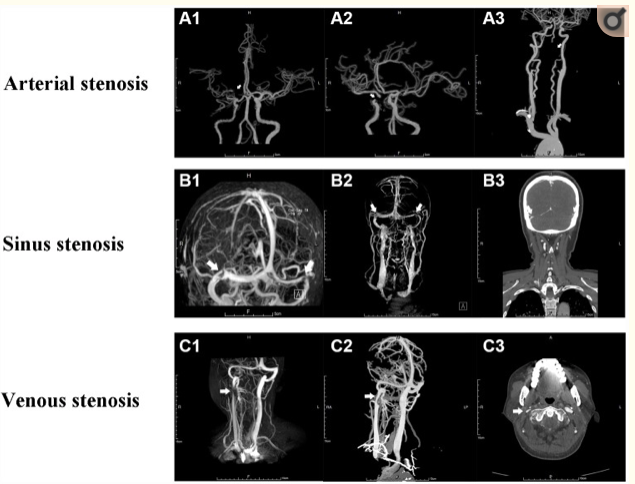 Here is my husband's MRV from Stanford 5/09, prior to his stenting treatment to open his jugular veins.  Notice the curly collateral veins running alongside the pinched jugulars.  This is what venous stenosis looks like.  He did not have an MRV after treatment, but he did have his cerebral blood flow transit time measured and his hypoperfusion was reversed.