Seven years ago, when Jeff was diagnosed with MS, I asked his neurologist why his blood was hypercoagulated.  Why were his fibrinogen, c reactive protein, pro-thrombin and SED rates so high?  Why did he have all those tiny blood spots on his legs?  She replied that she didn't know, since it "had nothing to do with his MS."

But seven year later, we know that wasn't true for him, and it's apparently not true for other people with MS.

After Jeff's diagnosis I went to the library and read medical journals online. I read Dr. Roy Swank's research, and saw he noted this blood vessel breakdown, as evidenced by what he called, "capillary fragility" on the limbs of his MS patients during their relapses, manifesting as blood spots called petechiae.  (see pic below.)   He saw hypercoagulation in their serum, too.    Dr. Swank knew it mattered.  In 1958, he saw what I was seeing on Jeff's legs in 2007.

Jeff's hypercoagulation and petechiae were related to his MS.  Dr. Swank did not have the science of nitric oxide as EDRF in his time, but modern researchers have since connected hypercoagulation and clotting proteins as evidence of endothelial dysfunction and a break down of the blood brain barrier, and activation of the coagulation cascade.  This research comes decades after Dr. Swank's discoveries, but confirms what he saw as "blood vessel fragility."  We now know that endothelial dysfunction and a break in the BBB will affect the blood through out the body.  Once the coagulation cascade is activated, it is systemic.  And these extravasated red blood cells will leak and appear throughout the body.  Just like Jeff's petechiae--and the break in his blood brain barrier.

The disruption of integrity of the walls of brain blood microvessels rapidly activates the coagulation cascade.
http://www.ncbi.nlm.nih.gov/pmc/articles/PMC3268209/

The coagulation cascade plays a major role in the development of an inflammatory response in MS.
http://circres.ahajournals.org/content/110/9/1157.extract#

Other researchers have noted hypercoagulation and high fibrin levels in the blood of pwMS for decades.  But these markers have been largely ignored.  Until recently.
Here's more on this research from the Gladstone Institute.

A protein involved in blood clotting may be a new indicator to help detect multiple sclerosis (MS) lesions before symptoms arise. The presence of the clotting protein, thrombin, signals an early stage of the disease when the blood-brain barrier is breached and the brain’s immune response is set into motion. The research was presented at Neuroscience 2013, the annual meeting of the Society for Neuroscience and the world’s largest source of emerging news about brain science and health.

The researchers found that thrombin, usually a beneficial protein involved in blood clotting, builds up in the central nervous system as MS progresses. Thrombin enters in the brain together with fibrinogen, another clotting protein when the protective barrier between the blood and brain becomes leaky. Thrombin converts the fibrinogen to fibrin which activates brain’s immune cells that break down the protective myelin sheath that surrounds neurons in the central nervous system. Because thrombin levels increase as the disease progresses, the researchers conclude that it could be used as an early detector of the disease.
http://www.bioquicknews.com/node/1420

More researchers are noting this break in the endothelium, and detecting these microscopic bleeds in the MS brain.  At the ISNVD conference, Dr. Yulin Ge recently discussed how 7T MRI technology is allowing us to see tiny hemorrhages in the MS brain which occur before demyelination.  This further elucidates the microvascular connection to MS.
From his abstract at the ISNVD:


Being the most common demyelinating disease of the central nervous system, multiple sclerosis (MS) MS has a significant microvascular pathological component as a consequence of the perivascular inflammation. The role of vascular pathology in MS was suggested long ago. Now there is accumulating evidence of a primary vascular pathogenesis in MS. In vivo studies of vascular and hemodynamic impairment in MS may provide insights into the etiology and pathophysiology of MS and offer the potential metrics for assessment of outcome of the disease.

Canadian microbiologists have recently published a paper on the iron around MS lesions, and link it to the vasculature and "chronic extravasation of hemoglobin", or microbleeds causing oxidative stress in the brain.
http://www.ncbi.nlm.nih.gov/pubmed/24504127

Dr. Zamboni saw the parallels of venous disease of the legs and MS, and wrote about iron deposition and the inflammatory response in his 2006 publication,
The Big Idea: Iron-dependent inflammation in venous disease and proposed parallels in multiple sclerosis  http://www.ncbi.nlm.nih.gov/pmc/articles/PMC1633548/


These researchers would tell you that blood matters.  When red blood cells enter brain tissue, there are serious repercussions--including oxidative stress, inflammation, iron deposition and an upregulation of clotting proteins.   Why does the blood brain barrier become leaky, and allow plasmic particles access into brain tissue? The exact mechnism is not known, but it appears to be related to endothelial dysfunction.  It may be venous hypertension, lack of shear stress, and hypoxic injury created by CCSVI which is compounded by environmental factors like diet, exercise, stress, UV rays, viral and bacterial infections and smoking.  We need more research.

MS researchers ignore this connection at the peril of their patients' brains---and lives.
I'll keep writing about it, until the day when neurologists understand the connection of the red blood spots I saw on Jeff's legs, the lesions in his brain and spine, and his MS diagnosis.
Joan 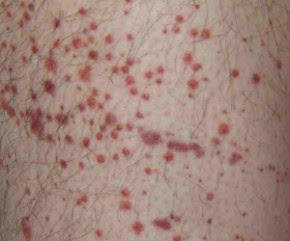