An ischemic stroke treatment--to be trialled for MS

Add a new medication to the ever-growing list of MS drug trials that address cerebral blood flow -not the immune system--3K3A-APC
With the growth of research into the connection of MS to cerebral blood flow,  we've seen an interest in exploring new ways to address hypoperfusion (slowed blood flow), endothelial dysfunction (damaged blood vessels) and brain atrophy (loss of brain tissue).


Why is this?  Because MS specialists, neurologists and advocacy groups are much more comfortable designing, testing and recommending a drug for MS, rather than encouraging healthy lifestyles and treating venous malformations.  It's almost impossible to have a placebo-controlled clinical trial for lifestyle.
http://ccsviinms.blogspot.com/2013/08/medications-for-ms-addressing-blood.html


3K3A-APC is a modified form of human protein C.  Human protein C is an anti-inflammatory which protects the endothelial barrier.  3K3A-APC was created to strengthen the endothelial barrier--to prevent reperfusion injury and microbleeds in the brain after stroke.
http://www.zzbiotech.com/zz/About_the_Company.html
http://www.scripps.edu/newsandviews/e_20120820/griffin.html

3K3A-APC was created by Dr. Berislav Zlokovic.  Dr. Zlokovic was the keynote speaker at the ISNVD two years ago.  He is an endothelial researcher I contacted in 2008 regarding the potential connection to MS.  I reached out to him while he was at my alma mater, and he kindly replied.   Dr. Zlokovic is now at the University of Southern California, where he has continued his research on the blood brain barrier, stroke and neurodegenerative disease.

Zlokovic is the scientific founder of ZZ Biotech, a Houston-based biotechnology company he co-founded with USC benefactor Selim Zilkha to develop biological treatments for stroke and other neurological ailments.

ZZ Biotech’s 3K3A-APC is a genetically engineered variant of the naturally occurring activated protein C (APC), which plays a role in the regulation of blood clotting and inflammation. 3K3A-APC has been shown to have a protective effect on the lining of blood vessels in rodent brains, which appears to help prevent bleeding caused by tPA.  http://news.usc.edu/56646/experimental-drug-reduces-brain-damage-in-rodents-afflicted-by-stroke/
Dr. Zlokovic's team has reached phase II this week, and they have just received and $8 million dollar grant from the NIH to test this drug in those who have had ischemic stroke.  I truly hope it can help these patients.  Dr. Zlokovic is a brilliant researcher, and this new drug has the potential to save brains.   http://www.acrpnet.org/MainMenuCategory/Resources/News/ACRP-Wire/CampusConnections.aspx

But the story does not end here....
ZZ Biotech's 3K3A-APC will also be tested for MS by USC's Neurology Dept.

This is from the Erase MS website, where they discuss research they are funding.

The fourth research study is Dr. Weiner’s at USC. He plans to test a drug that works on multiple disease processes that are observed in MS, including inflammation, changes in blood vessel functions and neurodegeneration. This drug is known as human 3K3A-APC, and is modified from a protein called activated protein C (APC).
http://www.erasems.org/current-research-update/

Here is what Dr. Weiner says about the drug...

Although anti-inflammatory drugs are clearly beneficial, there is a great need to develop treatments that can also protect brain cells from injury or death and subsequently, prevent neurodegeneration and disease progression.

To this end, and with the help of the Race to Erase MS, we have begun to test the possibility that a new neuroprotective drug can be developed for the treatment of MS. The drug, named 3K3A-activated protein C (3K3A-APC), provides potent protection for brain cells against injury and death in models of stroke and Alzheimer’s disease.
http://www.erasems.org/media/uploads/News_2013_R2E.pdf

Why does Dr. Weiner not even mention the fact that this drug's method of action is on the vascular endothelium?  That it is made to strengthen the blood brain barrier?   Why does he skirt around the fact that the anti-inflammatory/immune-modulating DMDs are NOT preventing neurodegeneration and disease progression?  Calling 3K3A-APC "neuroprotective" is not the whole story.  Dr. Weiner has spoken out against CCSVI research, calling those who have been successfully treated with venoplasty as benefiting from placebo affect.  But why did my husband's gray matter atrophy reverse?  Why no more progression?  Isn't adequate blood flow to the brain also "neuroprotective?"

Once more, 3K3A-APC was created to strengthen the endothelial barrier--to prevent reperfusion injury and microbleeds in the brain after an hypoxic event.

Is this further tacit proof of the connection of MS to cerebral blood flow?
I believe so.
Joan

(For those who enjoy hypotheses and research--here's my hypoperfusion/reperfusion injury theory of MS.  I still believe this is what we are seeing in the disease.  I believe this is MS.  If so, this medicine may be very helpful.)
http://ccsviinms.blogspot.com/2013/09/multiple-sclerosis-hypoperfusionreperfu.html 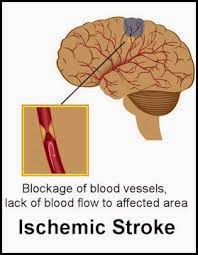