I was minding my own business, internally humming a John Philip Sousa march to keep up my pace (yes, I am a marching band nerd), as I hiked along the trail near our home.  Up ahead, about 25 yards ahead of me, I saw a coyote searching for prey in the underbrush.  It wasn't one of the scraggly coyotes we usually see in our neighborhood, it was rather large and well-fed predator.  A fighter.  Instead of continuing on the trail, I made an immediate decision to turn around, and headed back towards the main road.  I was in no mood for a confrontation.  I know that most coyotes will scare if you make a loud noise and look big and threatening, which isn't too difficult for me as a rather sturdy opera singer.  Studying this particular animal, I didn't feel as sure of my human superiority.  I went the other way and avoided the confrontation.

Lately, I've been feeling bombarded by confrontations.  Maybe you do, too?   We live in an exceedingly argumentative, in your face world.  Perhaps it's always been so, but I think we're all acutely aware of this fact, thanks to social media.  Our "news" sources pick up on this basest human desire for conflict, and provide us lots of clickable headlines.  Folks feel comfortable posting the vilest comments, hidden behind screen names and walls of anonymity. The more provocative the headline, the more clicks.  It's no longer about presenting actual news, it is about framing occurrences in a particular world view with a large side order of opinion. Clicks are selling soap these days.

Politicians understand this, and we are deluged daily with verbiage that seems as though it was transcribed from a middle school bathroom wall.  It's beyond shocking, and more saddening is the fact that it appears to be connecting with people.  Our family visited Washington, DC last summer, and I was moved to tears as we read President Lincoln's words inscribed on his memorial.  Will we ever hear this kind of intelligent, thoughtful discourse again?   We need to expect better from potential world leaders.

We all sense the precariousness of life.  Confrontational ideologies and words lead to avenging with guns and bombs.  As our population grows and natural resources become more scarce---water, clean air, trees, food, and yes, even oil---we are going to have to figure it out.  It is going to take a concerted effort.  May we be led, as Lincoln quoted Dickens in his inaugural speech,  by "the better angels of our nature."

For those of us who have been advocating for research and treatment in venous disease and multiple sclerosis, the initial push back and confrontation first came as a surprise, but is now a given.  When I brought Dr. Zamboni's research to Stanford University, I truly expected MS specialists to greet this research with enthusiasm and interest.  My naivete soon gave way to an understanding that research for a disease which already had 20 billion dollar a year pharmaceutical model would be guarded by the gate keepers of industry.  Why learn about MS etiology and help people, when there's already so much money being made on drug treatments?

As advocates for expanded MS research, we've all dealt with this confrontation and controversy. We've written letters to politicians and researchers, confronted MS specialists at rallies or conferences, made videos, replied to badly researched and one-sided news stories,  posted studies and research online,  raised money for clinical trials,  put on international conferences, started non-profits,  and shown up for each other.  At times, it's felt hopeless and exhausting.  But the truth is, we've all made a difference.

We may not have confronted the coyote head-on, but we have found ways around him.  By not going away and showing up.  By supporting research and sharing information with each other. By being encouraging and kind.  We just kept moving.

My walk took longer than normal today.  Because I chose to avoid a confrontation, I had to back track and head out to the road.  But that was just fine. I was able to talk to two of my neighbors and share gardening and health chit chat.  I got more exercise, hummed my Sousa march a bit longer, got more sunshine, and had this thought, which I've now shared with you.  Finding ways around confrontation, whether online or across the holiday dinner table, can sometimes reap wonderful rewards.

"In the confrontation between the stream and the rock, the stream always wins.  Not through strength, but through persistence."  Buddha 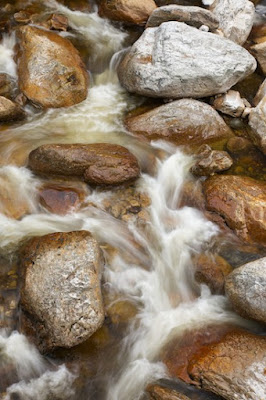