MS Vascular Research Round Up

I wanted to do a summary post on the most recent research into the vascular connection to Multiple Sclerosis, prior to Dr. Zamboni's presentation at the Veith Conference in New York City this Saturday.   CCSVI Alliance will be hosting a patient friendly "Facebook Live Event" on November 18th with Dr. Zamboni.  Link to Facebook Event Page

Since Dr. Zamboni first published his pilot study in 2008 of MS patients treated with venoplasty to relieve slowed venous drainage, or a condition he named Chronic Cerebrospinal Venous Insufficiency,  the landscape of neuroscience has changed drastically.

In fact, we now know that the brain has a cleansing system connected to the peripheral lymphatic system, which depends on timely and efficient drainage.

Here's a BBC radio presentation on the importance of the newly discovered Brain's Drain.
link
As the science reporter states in this interview,
"Making sure a drainage system is flowing properly could be really important for the health of the brain."

We are learning more about how the brain clears proteins, metabolites, immune cells and waste---while awake and asleep.  The jugular veins are the major collection area for this process--as this is where the brain's lymph, CSF and deoxygenated blood converge.   link

If researchers want to investigate a method of action (MOA) as to how venoplasty to relieve slowed venous drainage and repair of jugular defects has helped people with MS, they might consider the following:

1.  Corroboration of the brain's lymphatic system in humans.

NIH researchers find lymphatic vessels in humans, and confirm prior research from the Kipnis Lab at University of Virginia.

The researchers also looked at the suspected lymphatic vessels in autopsied human and monkey brain tissue. They found that the vessels contained specific cells and protein markers that are unique to lymphatic vessels and distinguished them from blood vessels. These findings suggest the lymphatic system is a common feature of mammalian brains.
“We literally watched people’s brains drain fluid into these vessels,” Reich says. “We hope that our results provide new insights to a variety of neurological disorders.”
“These results could fundamentally change the way we think about how the brain and immune system interrelate,” says NINDS Director Dr. Walter J. Koroshetz
.link

The Gladstone Lab confirms that all it takes to initiate demyelination in the brain is a drop of blood on brain tissue.  The clotting protein, fibrinogen, which increases when the coagulation cascade is initiated during a break in the blood brain barrier, is highly destructive to myelin.  Not only does fibrinogen damage myelin, it blocks the body's stem cell mechanism of myelin repair.

If the brain is unable to drain in a timely and efficient manner, venous hypertension and small breaks in the blood brain barrier may occur.  These cerebral microbleeds have been documented on 7T MRI in MS patients.

Akassoglou has spent much of her career studying the role of the blood-brain barrier and fibrinogen in neurological diseases. She previously showed that when blood leaks into the brain, fibrinogen causes inflammation by acting in brain immune cells, which can lead to brain damage.
In the new study, Akassoglou and her team uncovered another, yet unexpected effect of blood leaking into the brain.
“We found that fibrinogen stops adult stem cells from transforming into the mature cells that produce myelin,” explained first author of the study Mark Petersen, MD, a visiting scientist in Akassoglou’s laboratory and an assistant adjunct professor of pediatrics at UCSF. “This blockade could be harmful for regeneration in the brain.”  link

4.  Endothelial cells are the interface between lymphatic, immune and vascular system of the CNS.

Researchers are probing further into the importance of vascular endothelial cell health, in light of the new discovery of brain's lymphatic network.

The lymphatic network linking the CNS to draining lymph nodes may contribute to the inflammatory reaction occurring in multiple sclerosis (MS). The abundance and strategic positioning of endothelial cells at the blood-brain barrier level most likely endow them with an important role in controlling local adaptive immune responses, rendering them potential therapeutic targets in neuro-inflammatory such as MS.
link

Disruption of the blood–brain barrier (BBB) is a defining and early feature of multiple sclerosis (MS) that directly damages the central nervous system (CNS), promotes immune cell infiltration, and influences clinical outcomes. There is an urgent need for new therapies to protect and restore BBB function, either by strengthening endothelial tight junctions or suppressing endothelial vesicular transcytosis.  link

5.  People with MS have cervical lymph nodes which are twice the size of normal people, whether or not they are on immune modulating MS drugs.

As the cervical lymph nodes are the collection area for the brain's newly discovered lymphatic system, and these nodes drain into the junction of the jugular and subclavian veins, this anomoly needs to be further investigated.

Cervical lymph nodes are the first drainage stations of the brain and therefore play a key role in neuroinflammatory disorders such as multiple sclerosis.  The abnormalities shown by ultrasound in cervical lymph nodes are related to deep ones and independent of the ongoing treatment, suggesting a relationship between lymphatic drainage and disease pathology.  link


As we can all see, understanding the vascular connection to MS is now expanding in research labs around the globe.  The era of the EAE mouse model of MS as an auto-immune disease is being replaced by an understanding of MS as an inflammatory disease related to cerebral perfusion, the vascular endothelium and lymph system.
And yes, venous function remains integral to this understanding. 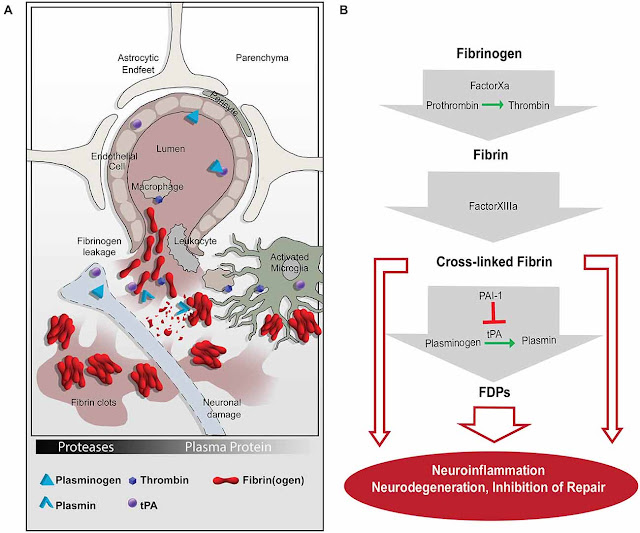 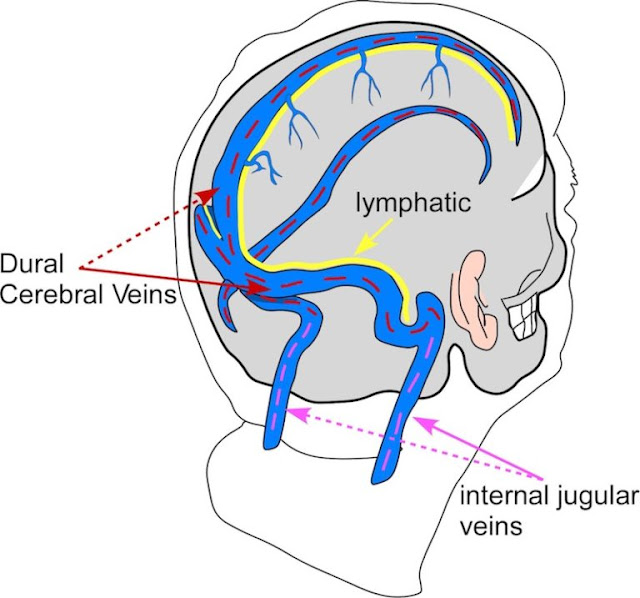