I want to simply state some facts for my readers.  Because if I don't, journalists and bloggers will continue to create a narrative of the kooky singing wife, who found some crazy researcher online and led the world on a goose chase.  And that's not true.  And it's really hurtful.

1.  I believed there was a vascular connection to my husband's MS diagnosis from day one.  That would be March 23, 2007, the day we got his serum results from the doctor and I saw so many numbers that were way out of normal range.   Coincidently, my birthday.

2.  Using Jeff's serum results as a point of reference, I went to the library and took out every single book they had on MS, including McAlpine's history of Multiple Sclerosis--which had a section on the long history of the vascular connection.  This is where I first read about Dr. Tracy Putnam.  link The pile of textbooks also included Dr. Swank's research.  Dr. Swank wrote about the connection of MS to the blood.  He published over 100 research papers on MS.  He wrote about capillary fragility, petechiae and hypercoagulation in his MS patients--all of this research rang a lot of bells for me.  link

3.  I was on a forum called "This is MS" in September 2007.  I wrote about Jeff's serum results, hypercoagulation, and postulated on a bunch of research with other people with MS and caretakers.  It was a great community, and we shared papers, programs and MS research.

4.  Using pubmed and my local library, I eventually came to the intersection between the vascular and immune system I had been searching for---the endothelium.  Using published and peer-reviewed science, I created The Endothelial Health Program for Jeff and shared it on This is MS in the summer of 2008.   I saw a connection between many of his vascular issues (petechiae, high Crp levels, hypercoagulation, high liver enzymes), endothelial dysfunction, and his MS diagnosis.  We found that by changing his diet to a Swank program, increasing his Vitamin D levels, including cardiovascular exercise, thinning his blood with proleolytic enzymes, getting him out in sunshine, reducing work stress, improving his sleep---he was doing much better, he did not have a relapse and his serum results normalized. http://ccsvi.org/index.php/helping-myself/endothelial-health

5.  I wrote to endothelial researchers at USC and Stanford, asking if they had any knowledge of studies or published research on the function of the endothelium in MS.  Both of them e-mailed me back.   I began a correspondence with the researcher at Stanford, because he was the most interested in this connection.  Here is part of his reply.  I have all of the e-mails, if anyone aside from me ever truly wants to get this story correct.

"I enjoyed reading your treatise.
I quite like the hypothesis that MS is secondary to a derangement of the endothelium of the cerebrovasculature, that results in inflammation and local damage.
I am also in agreement with your contention that a functioning endothelium is a major key to health.
Furthermore, I agree that diet and exercise are critical for endothelial health."

6.  It would be three months later I would send more research to this doctor.  One of the papers was Dr. Zamboni's new publication on CCSVI, which had been shared with me, the "vascular hypothesis gal" on This Is MS.   He was fascinated by the research, and suggested further testing for Jeff.  Here's part of that e-mail.

"You could get more evidence for cerebral venous abnormalities (I would be particularly concerned about venous stenoses) by MR imaging, with attention to the cerebral veins. "

7.  We would eventually bring Jeff up to Stanford for TESTING to see if he had any venous abnormalities.  It took a few months to schedule, as he was busy composing and we needed to travel from LA to the Bay Area.   He was tested in April, 2009.   My mistake was that I wrote about all of this online, on the This is MS forum.  I should not have done this.  It is my one, deep regret.  But it is also why I continue to blog and write.  Because I feel hugely responsible for what would later happen.

8.   Jeff had serious venous abnormalities, documented on MRV.  link  He had a 99% stenosis in his left jugular vein and an 80% closure of his right.  The doctor we were consulting with felt this was a serious issue for his brain perfusion, and suggested we think about potential treatment.  We went home.

9.  After consulting with other physicians,  Jeff scheduled his venoplasty treatment for May 2009.  He went back up to Stanford and was treated for his venous abnormalities.  He had a profound response on the table---he felt as though the "lights came on" after a stent was opened on his left side.   He came home and slept soundly, without spasms, for the first time in over a year.  He was dreaming again.  He also had a terrible headache the first day, and would develop severe shoulder pain from having his accessory nerve pinched by stents.  These side effects from the treatment would pass, but it was scary.  Again, I wrote about it online.

10.  People read what I wrote, called Stanford, were treated there or tried to get treated elsewhere.  The press picked it up, and the rest is pretty well documented.  What is never reported correctly is that I didn't force an IR to treat Jeff.   We asked him to TEST Jeff for venous abnormalities.  When we saw how bad they were, the IR suggested treatment,  and we eventually agreed.

I never called venoplasty a cure for MS.  I also never meant for people to get hurt, or travel for medical tourism, spend thousands of dollars (as Jeff was covered by our insurance)  or most terribly, to die from complications.  I certainly didn't want to be labeled the crazed wife who forced an IR to treat her husband.  I always said this was only part of living a vascularly healthy life, to encourage healing and strengthen the heart-brain connection.  I never used the word cure.   I started the Facebook group because I was really concerned with how this research was being discussed as a cure.    link  I was also shocked with how vehemently the MS specialists were denying any link to the vasculature.  I wanted people to know this was only a treatment, and it might not be right for them. Which is partially why I stayed online.   That, and a huge amount of pride, I'm sure.  Ego is never a good thing, and I know it complicated this issue.

But in all honesty, all I wanted were answers for the love of my life.  And we hung around because we had hoped this could be helpful to others.  But to be continually portrayed as cure seekers, zealots and wingnuts by the NY Times, the Wall Street Journal, and other publications (which will live online ad infinitum) and to have our names linked to false and incomplete reporting is simply too much.

Going for a walk with my love, and our 17 yr. old dog, Angel (another medical anomaly)
Have a nice day, 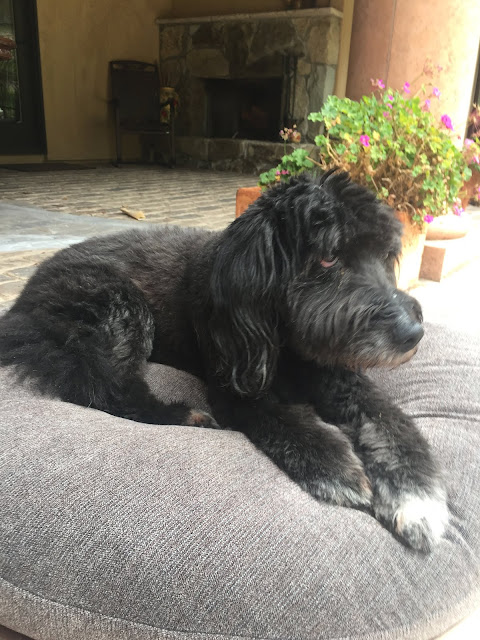