Why does MS progress?  What allows the disease to erode physical and mental abilities?  This is the big question for researchers and patients alike.  In the 1940s, it was assumed that the visible scars upon autopsy, the white matter lesions showing demyelination, were the cause of MS progression.  And the EAE mouse model of MS was created. MS was an autoimmune disease in which the myelin sheath was destroyed.  link

As MRI technology developed, the efficacy of disease modifying MS drug treatments was determined by the lack of new white matter lesions.   White matter lesions were considered the "bio marker" of MS disease progression.  And a twenty billion dollar a year business was created.  The narrative goes something like this:  MS is an autoimmune disease.  The immune system target is myelin.  The immune system is destroying myelin and must be stopped!  White matter lesions cause disability.  This was the finely crafted explanation of MS treatment, which continues today.

But it's not completely true.

In MS,  myelin destruction appears to be secondary to death of neurons
http://journals.plos.org/plosone/article?id=10.1371/journal.pone.0066117
http://www.direct-ms.org/sites/default/files/BruckInflamDegen2.pdf
http://www.ncbi.nlm.nih.gov/pubmed/19420101

As Dr. Philip James says, "Scars are a sign of healing."  Multiple Sclerosis means many scars, and these scars are a sign of an immune system attempting to repair the damage done during the break in the blood brain barrier.  And stopping demyelination does not stop MS progression.

Immunomudulating MS drugs may affect white matter lesions, but they do not prevent gray matter atrophy.

The assessment of brain volume changes on serial magnetic resonance imaging (MRI) scans can provide an objective measure of the neurodegenerative component of multiple sclerosis (MS) pathology. Results from placebo-controlled and crossover clinical trials indicate that immunomodulating (e.g. recombinant interferon-beta [IFNbeta]-1a [Rebif] and IFNbeta-1b [Betaferon] and glatiramer acetate [Copaxone]) and immunosuppressive (e.g. cladribine and alemtuzumab) treatments for relapsing-remitting (RR) and secondary progressive MS lack substantial efficacy in preventing the development of brain atrophy, despite the marked effects of these treatments on clinical and MRI outcomes of disease activity.

The striking differences in EDSS development at one year follow-up, combined with the high subcortical atrophy rates in EDA patients compared to controls, support the use of NEDA as an outcome measure in MS. The high subcortical atrophy rates in the EDA patients, combined with the high proportion of patients treated with first line DMTs in this patient group, underlines the need for treatment strategies targeting GM atrophy in early RRMS, especially in patients with evidence of disease activity.
link

The thalamus might be, thus, an ideal region of interest to test the effectiveness of new neuroprotective MS drugs. Especially, we will address underlying pathological mechanisms operant during thalamus degeneration in MS, such as trans-neuronal or Wallerian degeneration. Furthermore, we aim at giving an overview about different paraclinical methods used to estimate the extent of thalamic pathology in MS patients, and we discuss their limitations. Finally, thalamus involvement in different MS animal models will be described, and their relevance for the design of preclinical trials elaborated.
link

As you can see, MS drug companies know gray matter atrophy is a real problem in disease progression, which is why they are paying researchers to look at thalamic atrophy in MS, and see how their newest drugs are doing in maintaining gray matter.   Check out BNAC's recent grants----Teva, Biogen and Novartis all want to know if their drugs are stopping gray matter atrophy.  This is not coincidence.   http://www.bnac.net/?page_id=359
Dr. Zivadinov has been publishing on thalamic atrophy and MS progression for a few years now.
http://www.buffalo.edu/news/releases/2013/03/028.html
http://www.ncbi.nlm.nih.gov/pubmed/23613615

So, what's the thalamus?  Where is it, and what does it do?
Your thalamus is a vital brain structure, which resides deep within the brain as gray matter--called "gray" because of its color.  Gray matter is neurons and glial cells. and lacking the white matter color created by myelin.  The thalamus is responsible for relaying information to the rest of your brain.  It receives sensory input: the auditory, visual, smell and touch messages, and directs those messages to the rest of the brain.  If the thalamus is damaged or loses neurons (what we call "atrophy),  vision problems, sleep problems, balance and walking problems would result.  Just like what we see with MS progression.

The walls of the third ventricle are formed by the thalamus, so when there is shrinking and a loss of gray matter--the third ventricle expands and gets wider, as it fills with more cerebrospinal fluid.  Your brain, like all nature, abhors a vacuum.  CSF fills in the gaps.

Here are some MRI examples of how the thalamus shrinks, and the third ventricle (the black area in the center/top of the brain) expands--  from left to right--normal brain, RRMS, and right is progressive MS

Want to find out how your own brain is doing?  Ask the MRI techs to look at your gray matter.  Specifically your thalamus and width of the third ventricle.  They can go back and compare your past MRIs, too.  That's how we found out that Jeff's gray matter atrophy had reversed, and his gray matter now looks normal, nine years since MS diagnosis and almost 7 years since treatment for CCSVI.  The width of his third ventricle is completely normal.  No sign of any gray matter loss.

Here's more on MRI technology and measuring the thalamus.  Note that the researchers mention how "ventricular enlargement" can give an indication of gray matter loss.
Thus, there is a huge need of a methodology suitable to be applied in daily clinical practice in order to estimate GM atrophy in a convenient and comprehensive way. Given the thalamus is the brain structure found to be more consistently implied in MS both in terms of extent of atrophy and in terms of prognostic value, we propose a solution based in this structure. In particular, we propose to compare the extent of thalamus atrophy with the extent of unspecific, global brain atrophy, represented by ventricular enlargement.
http://www.ncbi.nlm.nih.gov/pmc/articles/PMC4144089/


The notion that clinically relevant MS pathology is restricted to focal WM lesions has been overwhelmingly negated by an expanding body of neuropathologic data implicating significant cortical myelin, neuro-axonal, and synaptic loss2–5,9,19 in both early and late stages of the disease. Pathology afflicting the deep GM structures, in particular the thalamus, is frequently observed in MS, but less well studied.
http://www.ncbi.nlm.nih.gov/pmc/articles/PMC3589190/

I would suggest that understanding how CSF, (g)lymph and blood are all drained through the deep gray matter structures of the brain via the venous sinus and paravenous pathways is vitally important.
http://www.ncbi.nlm.nih.gov/pmc/articles/PMC3699410/

Maintaining gray matter should be the target for all MS treatments.

Here are all my blog posts on maintaining gray matter.  I've been writing about this for awhile, and am truly shocked that this topic is not being discussed by MS specialists, who are still hyperfocused on white matter lesions.
link

Hope this helps you understand your own brain, and gives you some questions to ask the MRI techs and your neurologist.
Keep learning---it will maintain those neurons, and keep your gray matter going strong!
Joan 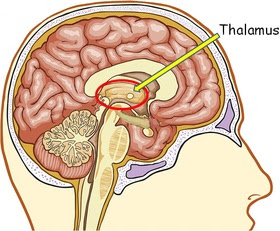