Inadequate cerebral blood flow and loss of neurons in MS

A new study was recently been published in the JAMA Neurology journal.  One of the investigators is Yulin Ge, MD--a recent presenter at the International Society for Neurovascular Disease conference.  www.isnvd.org  Dr. Ge has been imaging the MS brain for over a decade at NYU, and he has found many vascular connections to MS.

The study looks at cerebrovascular reactivity, or CVR.  CVR is how the brain reacts or responds  with blood flow when there is vasodilation.  This function is extremely important, as neurons need adequate blood flow to provide glucose and oxygenation.  Without this response of adequate cerebral bloodflow (CBF), the brain will not function properly, and neurons can potentially die.

What this new study did to measure CVR was to look at how healthy controls and pwMS responded to a hypercapnia (too much carbon dioxide), which the researchers created by using 5% carbon dioxide gas.  This gas increases cerebral blood flow by creating vasodilation--or a widening of blood vessels.  A healthy endothelium (lining of the blood vessels) would normally respond to hypercapnia by widening vessels and allowing for more blood to flow to the brain.

Patients with MS had a significant decrease of cerebrovascular reactivity compared with controls. This decrease in CRV correlated to gray matter atrophy, but did not correlate with white matter lesions.

Their conclusion was that there is an impairment in the cerebrovascular pathophysiology in pwMS, and that inadequate blood flow to neurons may indeed be the cause of neurodegeneration in MS.  And that this was a vascular problem, NOT a problem initiated by white matter lesions.

We know that impaired CVR is related to arterial stenosis and occlusion of the blood vessels in the neck.  http://www.hindawi.com/journals/rrp/2012/268483/

Note that this new study did not hypothesize why this is happening in people with MS. But this study could well be related to what the Columbia researchers saw when they damaged the vascular endothelial cells outside the brain.

The Columbia University study, which was published earlier this summer, found that when researchers damaged the vascular endothelial cells lining the blood vessels outside the brain using lasers to cause oxidative stress,  they could disrupt blood flow to the brain and affect neurovascular coupling.  http://ccsviinms.blogspot.com/2014/06/columbia-researchers-provide-new.html

Dr. Zamboni has noted that there is a derangement of the endothelial cell layer in the jugular veins and valves in people with CCSVI/MS.  This loss of endothelial cell integrity could well be causing the decrease in cerebrovascular reactivity seen in people with MS.
http://phl.sagepub.com/content/early/2014/06/27/0268355514541980.abstract

As an anecdotal side note, my husband's gray matter atrophy reversed after he was treated for dural and jugular venous stenosis and began following the Endothelial Health Program.
http://ccsvi.org/index.php/helping-myself/endothelial-health
And he has had no further MS progression since 2007.

The heart and brain are connected, and a healthy endothelium is essential to both.
Something to consider,
Joan 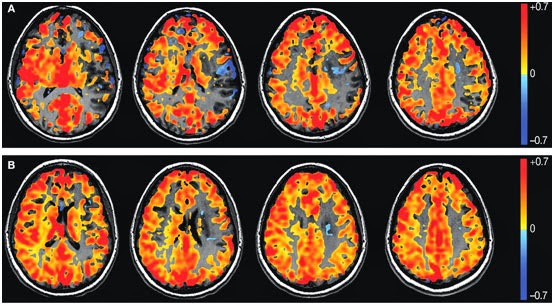