Putting the Pieces Together

In my last blog post, I asked WHY cerebral circulation time might be doubled in people with MS.  In this post, I'm going to attempt to answer this question, using recent peer-reviewed research.  Because the answers are out there, we just need to put the pieces together.

A recent study published in JAMA Neurology Journal by Yulin Ge, MD showed how pwMS had impaired cerebrovascular function.  Dr. Ge is a member of the International Society for Neurovascular Disease.  Dr. Ge has been imaging the MS brain for over a decade at NYU, and has found many vascular connections.

Now, to explain what Dr. Ge and his fellow researchers at NYU found.  CVR is how the brain reacts or responds with blood flow when there is vasodilation in blood vessels.  This function is extremely important, as neurons need adequate blood flow to provide glucose and oxygenation.  Without this response of adequate cerebral bloodflow (CBF), the brain will not function properly, and neurons can potentially die.

Patients with MS had a significant decrease of cerebrovascular reactivity compared with controls. This decrease in CRV correlated to gray matter atrophy, but did not correlate with white matter lesions. Their conclusion was that there is an impairment in the cerebrovascular pathophysiology in pwMS, and that inadequate blood flow to neurons may indeed be the cause of neurodegeneration in MS.  And that this was a vascular problem, NOT a problem initiated by white matter lesions.  Something was wrong with the blood vessels response.  Increased blood flow did not happen when it was needed.

Impaired CVR would most certainly cause a delay in cerebral circulation time!  These two conditions are intertwined.

Another study on impaired CVR looked at why this might be happening.
A Columbia University study, published last summer, found that when researchers damaged the vascular endothelial cells lining the blood vessels using lasers to cause oxidative stress,  they could disrupt blood flow to the brain and affect neurovascular coupling.  http://ccsviinms.blogspot.com/2014/06/columbia-researchers-provide-new.html

Did you catch that??
Damaged endothelial cells in blood vessels changes neurovascular coupling, and cerebral blood flow is reduced.

“Our latest finding gives us a new way of thinking about brain disease—that some conditions assumed to be caused by faulty neurons could actually be problems with faulty blood vessels,” Hillman adds. “This gives us a new target to focus on to explore treatments for a wide range of disorders that have, until now, been thought of as impossible to treat.

Dr. Zamboni has noted that there is a derangement of the endothelial cell layer in the jugular veins and valves in people with CCSVI/MS.  This loss of endothelial cells could well be causing the decrease in cerebrovascular reactivity seen in people with MS.  And it is caused by CCSVI.http://phl.sagepub.com/content/early/2014/06/27/0268355514541980.abstract

Here are my proposed steps as to why pwMS have delayed cerebral circulation time.

1. Loss of laminar flow, refluxive blood flow and oxidative stress causes endothelial cell death and dysfunction in the vessel walls of both arteries and veins.
2. Without endothelial cells in blood vessels, cerebrovascular reactivity is decreased.
3. This decrease in CVR leads to a slowed cerebral circulation time.
4. Slowed blood flow leads to neuronal cell death and brain atrophy, as well as an hypoxic situation which creates white matter lesions and inflammation.  Voila.  MS.


The research is out there.  If someone could please send this to "The Mouse Doctor" at Barts--he is not taking any responses from me on his blog.  But at least he is FINALLY looking at blood flow.
http://multiple-sclerosis-research.blogspot.com/2015/02/is-ms-starving-brain.html

If you want some GREAT news---Dr. John Cooke's team is now figuring out how to create healthy new endothelial cells from fibroblasts, which could then be implanted in patients.
http://www.genengnews.com/gen-news-highlights/fibroblast-transformed-endothelial-cells-show-promise-for-damaged-tissue-repair/81250576/

But what do I know?
It's only been seven years since I contacted Dr. Cooke at Stanford and asked him what he thought about endothelial dysfunction in MS.
http://ccsvi.org/index.php/helping-myself/endothelial-health
Joan 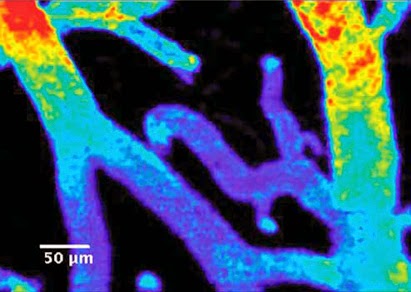