We are living in very exciting times.  During the past few years, researchers have changed what was thought to be known about the brain--specifically how it cleanses and protects itself.
Textbooks are being re-written.

These discoveries are truly earth-shattering, and especially important for people with neurodegenerative diseases like MS, Alzheimer's, Parkinson's and dementia.

New technologies have allowed researchers to see exactly how the brain cleanses itself while we sleep, via the newly defined "glymphatic" system, which relies on the sleep state to remove toxins, proteins and metabolites from brain tissue.   Before this discovery, it was not known how the lymphatic system functioned in the central nervous system.  Researchers had assumed the brain was cleansed with cerebrospinal fluid, but they really weren't sure how this took place.  Now it is understood that there is a specialized CSF/lymphatic system in the brain, which has been called the "glymphatic" system because of the importance and reliance on the glial cells.

This discovery was made at the University of Rochester, and is currently rocking the world of sleep specialists.  It explains the link between sleep problems and neurodegenerative disease, and provides some answers as to why sleep is so essential for brain health.
link

I was able to visit Dr. Nedergaard's lab at the U of R, where this discovery was made,  to see how she and her associates are taking this research forward into translational medicine and potential treatments.  As Dr. Nedergaard told me, good sleep and adequate drainage of the brain are key to brain health.  Nothing can be done to help the brain heal (via stem cells or medications) until these mechanistic systems are functioning adequately.
link

Further understanding of this discovery has been made at the University of Virginia School of Medicine by Dr. Jonathan Kipnis. The Kipnis Lab has found previously undetected vessels that carry immune cells in the CNS.  Seeing these vessels was like discovering a new planet in our galaxy.   Researchers thought they understood how the brain's immune system functioned and how the CNS was "immune privileged"--but in reality, they were completely wrong.

The relationship between the brain and the immune system has long puzzled researchers. For some time, scientists thought that immune cells only showed up in the brain during an infection. The brain is considered “immune privileged,” such that when exposed to foreign material, it takes longer to mount an immune response than does the rest of the body. Furthermore, to date, traditional lymphatic vessels had not been found there.
link


This stunning new research shows that the brain and central nervous system is no different from the rest of the body.  We now can study how the immune system works in the brain, and how these lymphatic vessels allow or inhibit immune cells in brain tissue.

What do these newly discovered lymphatic cleansing and immunological systems share?

They are lymphatic vessels and rely on veins.


That's right.  The glymphatic system which cleases our brain utilizes paravenous spaces.  This newly discovered immune system in the CNS drains along the dural sinuses.

In searching for T-cell gateways into and out of the meninges, we discovered functional lymphatic vessels lining the dural sinuses. These structures express all of the molecular hallmarks of lymphatic endothelial cells, are able to carry both fluid and immune cells from the cerebrospinal fluid, and are connected to the deep cervical lymph nodes.
link

Kipnis described them (the newly discovered vessels) as "very well hidden" and noted that they follow a major blood vessel down into the sinuses, an area difficult to image. "It's so close to the blood vessel, you just miss it," he said. "If you don't know what you're after, you just miss it."
link

Kipnis and his colleagues found that vessels expressing markers of lymphatic vessels elsewhere in the body ran along the dural sinuses, drainage lines in the brain that collect outgoing blood and CSF, emptying these fluids into the jugular vein. They also found that the vessels contained immune cells.  link


The implication of these discoveries is monumental.  If lymphatic vessels do not have adequate drainage, due to a stenotic dural sinus,  jugular stenosis, mechanical impingement or venous problems, the brain's immune system and cleansing system will not function properly.
The venous system which drains the brain is essential for perfusion, cleansing and proper immune function.


"Instead of asking, 'How do we study the immune response of the brain?' 'Why do multiple sclerosis patients have the immune attacks?' now we can approach this mechanistically. Because the brain is like every other tissue connected to the peripheral immune system through meningeal lymphatic vessels," said Jonathan Kipnis, PhD, professor in the UVA Department of Neuroscience and director of UVA's Center for Brain Immunology and Glia (BIG).

The brain is like every other tissue in our body.  It needs adequate venous drainage, so that lymphatic drainage can occur.


The images below show normal venous structure on the left,
contrasted to Jeff's stenotic jugular veins, pinched off dural sinus and inefficient, curly collateral veins on the right, as they looked on MRV prior to his venoplasty treatment.
Jeff has had no MS progression and a healing of most of his MS symptoms after successful stenting of his veins six years ago.
Endovascular stenting of the venous sinus is an approved treatment for intracranial hypertension, and a recent review shows the benefits.  link 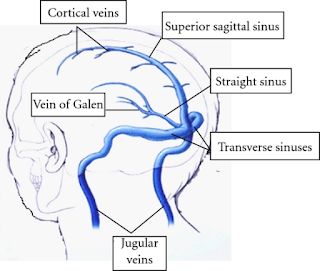